In the monthly Alternative Controller edition of Beyond Screens, Tatiana Vilela dos Santos (Mechbird) and Alistair Aitcheson (The Incredible Playable Show) interview game-creators who work with custom-made controllers and real-world objects. You might get a glimpse inside a creator’s workshop, see how strange controllers are put together, or discover what drives our guests to explore interfaces beyond the keyboard and joypad.

Wednesday’s show features two guests: Phoenix Perry is the creator of Bot Party, a game which explores physical touch and music-making, and author of a PhD thesis on the development of alternative controllers. Robin Baumgarten created the IndieCade Award-winning Line Wobbler, alongside numerous wobbling pieces made with touch-sensitive springs and LED rings.

Phoenix Perry creates embodied games and installations. Her work brings people together to explore their impact on each other and the environment. As an advocate for women in game development, she founded Code Liberation Foundation. Presently, she leads an MSc in Creative Computing at University of the Arts London’s Creative Coding Institute. Since 1996, she has exhibited in a range of cultural venues and game events including Somerset House, Wellcome Collection, Lincoln Center, GDC, A Maze, and IndieCade. She owned Devotion Gallery in Brooklyn, NY from 2009 – 2014. Devotion generated dialogue between art, technology, and scientific research. 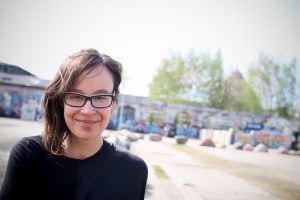 Robin Baumgarten is an experimental hardware game developer and interactive installation artist based in Berlin. After researching Artificial Intelligence in Games and working on mobile games, he is now fully focused on creating playable interactive installations that straddle the divide of games and art, such as Line Wobbler and Wobble Garden. 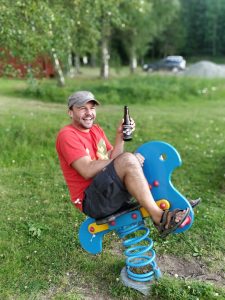